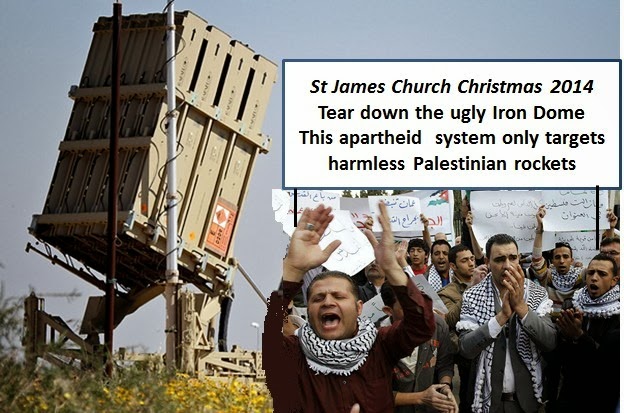 Sad news this morning:  numerous Palestinian resistance rockets fired into the Zionist entity - including five targeted at occupied Ashkelon - were all intercepted by the Iron Dome system. It is vital that everybody in the Free Palestine Now movement recognizes the importance of destroying the apartheid Iron dome system whose only purpose is to save the lives of Zionist terrorists targeted by Palestinian freedom fighters. Therefore I believe this surely is a perfect subject for the next Christmas pro-Palestinian campaign by the St James' Church Piccadilly: Build a life-size replica of the Iron dome and demand it be torn down.

In fact, to save much time and effort I have prepared the Press Release for the event

This Christmas, in solidarity with the downtrodden Palestinians of Gaza, we are building a life-size replica of the hideous Iron Dome system which, according to international human rights lawyers, has been illegally intercepting Palestinian rockets.  The racist Israelis have been installing hundreds of these monstrosities all across the land that Jesus walked on and which is sacred to Palestinian Arabs. These monstrosities are a blight on the lives of the Palestinians, but most of all they perfectly represent the apartheid nature of the Israeli system, since they target only Palestinian rockets (no Israeli rocket has ever been intercepted). Moreover, these largely harmless Iranian-made Grad rockets are paid for by EU taxpayers, so the Iron Dome is also cheating every EU citizen, as well as destroying the output of the only major growth industry in Gaza.

The Zionists laughingly claim that the system 'saves lives'. But everybody knows that the 3,962 Grad missiles targeted at Zionist-occupied cities in the last 3 years that have been illegally intercepted by the Iron Dome were never intended to kill more than a few hundred Zionists each. They are just harmless fire-crackers. Compared to the three million babies bayoneted to death by Zionist soldiers every day in Gaza, and the 4 million babies who die of starvation every single day in Gaza as a result of the Zionist siege**, any Zionist 'casualties' are completely irrelevant.

Our replica of the Iron Dome is costing just 259 billion pounds, and is being funded voluntarily by UK and EU taxpayers through the financing of two charities: the Christian charity “War on Israel” and the Muslim Charity “Jihad against Jews”. On the 12th day of Christmas (6 January 2015) the Iron Dome will be torn down and destroyed as an act of hopeful symbolism.

See also: Tear down this barrier