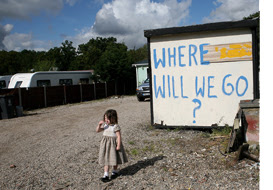 We in the Free Palestine movement align ourselves strongly with the United Nations, Amnesty International, and every left-wing group imaginable who have campaigned against the forced evictions of the Gypsies at Dale Farm. This is a breach of their human rights, and it is absolutely right that they should have received widespread international support.

These 80 families - whose culture demands that they do not stay in one place for long  - may have lived illegally on rich land for 8 years, but they have every right to stay there at tax payers expense even though they pay no taxes, do no work, and harass and steal from their neighbours.

The plight of the Gypsies forcibly evicted by their government is, of course, in no way whatsoever comparable to the 5000 Zionist Jews who were forcibly evicted by their government from Gaza in 2005. That eviction was a glorious victory for human rights - indeed I am proud that the same organisations who campaigned  for the 'human rights' of the Gypsies were the very ones who were demanding the eviction of the Zionist Jews. After all, the Zionist Jews had deviously bought the land and built their homes legally -  indeed with the full encouragement of their government. And, unlike the extensive 8 years which enabled the Gypsies full rights to their land, the Zionist Jews were only in Gaza for 35 years during which time they deviously developed previously barren land from scratch themselves, and in typically Zionist fascist style insisted on paying taxes, working - indeed building farms, factories, greenhouses and generating work and wealth for their Palestinian neighbours who were thus denied the luxury of sitting in their home doing nothing all day and starving.


And finally we must also remember that, unlike the Zionist Jews, the Gypsies were so loved by their neighbours.

I pay special tribute to my colleague Minty Challis, one of the left-wing demonstrators who went to Dale Form to support the Gypsies and who stated absolutely correctly and without recourse to irony: "The travellers' suffering was the same as that of the Palestinians in Gaza".


In other news today I am please to report the following good news.
What hypocrites the Zionist are!  See here for more on this.
at 17:48 3 comments:

Palestinian solidarity with the people of Norway

My sympathy at the terrible loss of life in Norway extends especially to their left-wing politicians who thankfully dominate the country's political narrative. I have just heard one of their senior government members on the BBC news claim that, with the 'possible exception of the Beslan massacre', the Norway attack was 'unprecedented because it was the only terrorist attack in history in which children were specifically targeted'. 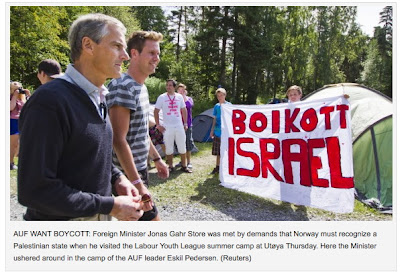 I am especially grateful that, according to most Norwegians, when Palestinians massacre Israeli children in their dozens in schools (as they did in Maalot in 1974) in their hundreds on buses (as they did during the second intifada and numerous previous occasions) at a disco, and even when they decapitate Israeli toddlers and babies as they did this year in Itamar, none of that counts as terrorism. Thankfully the Norwegians are usually the first to explain that the attackers had justified grievances.

And let's also makes it absolutely clear that the victims at Utoya Island were schoolchildren at a summer holiday camp. Just be because they were also, in fact, mostly young adults who were all part of the Young Socialist League at a political indoctrination event makes no difference. None of these people deserved to be harmed in any way, especially when you look at the photo above (courtesy of the Blaze, where you can read the full story) to see the kind of natural anti-Israel anti-capitalist activity they were involved with the very day before the attack.

In a Europe where countries fight with themselves to be seen as the leaders in anti-Israel activism I am delighted to state that Norway reigns supreme by a long distance. And, while it it is safe haven for our Islamic friends, it also leads the way in classic anti-Semitism. So long live Norway!

My thoughts go out to the Norwegian victims and their families and friends. But the Norwegian politicians are especially in the hearts and minds of the Palestinians (even more so when you see solidarity like this).

Rules and Guidelines for Countering the Zionist Media Narrative

Based  on my six years of working at the BBC I am pleased to be able to share with you extracts from the rule book issued to all members of the Western media corps (the BBC played a major role in developing these important rules and guidelines that help prevent some of the worst Zionist lies dominating the media narrative).

Read the rules and guidelines in full

We in the Free Palestine movement have been keen to push the following maps that show how Israel has been constantly stealing Arab lands.

But these maps are a complete lie. They totally misrepresent the scale of Israel's expansionism. The true maps, which I strongly recommend are reproduced for all future rallies to confront the Zionists, are the following: 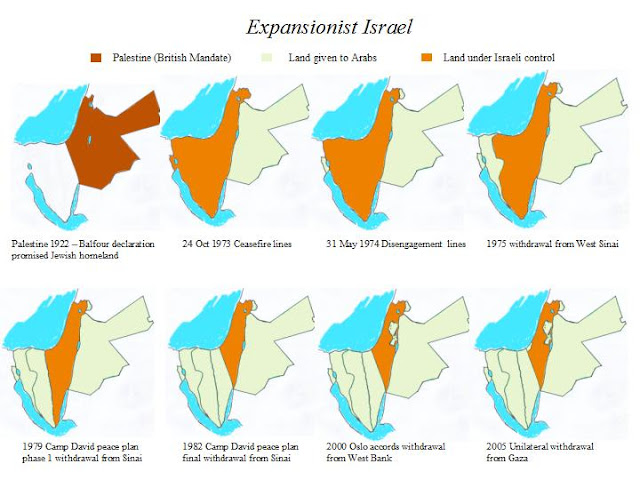 Also, it is very important to understand the massive scale of Israel in relation to its tiny Arab and Muslim neighbours: 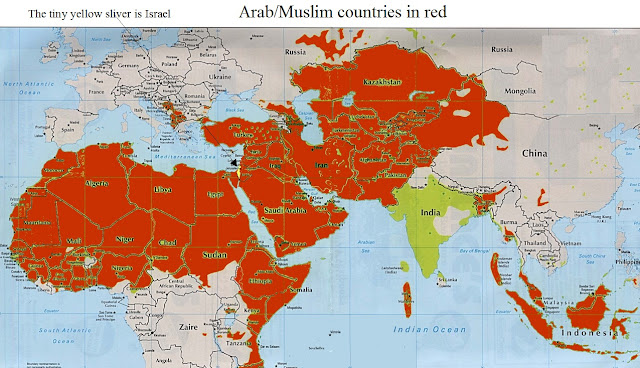 Why the Palestinians need our aid

We all know about the siege of Gaza and the millions of Palestinians starving to death. But what is less well-known is just how small a slice of of the international aid funding goes to the Palestinians. OK, so it may be true that the Palestinians are the only people in the world who have the their own dedicated United Nations agency (UNRWA) that has been going for over 60 years and has a multi-billion dollar budget. But why, for example should the Palestinians receive only 9 times more per capita in international aid than the next best supported country in the world? It is an outrage. How on earth are the PA and Hamas expecting to pay the 25% of the population who make up their security forces?
at 02:00 1 comment: