We support the Co Op boycott of Israel

In response to the Co-Op's well publicised decision to boycott all goods from illegal Israeli settlements I put all the money I had in a Britannia building society account (Britannia is part of the Co-Op) and wrote a congratulatory letter explaining why. However, I asked them why they were not boycotting all goods from the whole of the Zionist entity as this was clearly hypocritical. 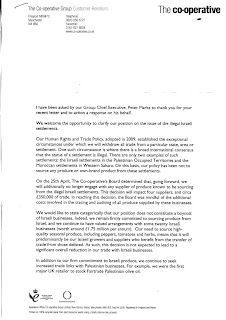 I got the letter shown shown here from Amanda Bailey (Customer Relations). Here is the response I have sent back to her:

Thank you for your letter of 19th July. I have a number of follow-up questions.

My first set of questions relate to your choice of criteria for boycotting countries. You assert that under your “Human Rights and Trade Policy” you withdraw all trade when there is a ‘broad international consensus a settlement is illegal’ and that ‘there are only two examples of such settlements: the Israeli settlements in the Palestinian Occupied Territories and the Moroccan settlements in Western Sahara”.  This suggests that there are some parts of the Zionist entity which are legal. Before addressing that issue, I note from your website that the most progressive countries in the world, namely Syria, Iran, Saudi Arabia, Pakistan, Somalia, Venezuela, Yemen and Zimbabwe are not on your boycott list. That is good because some right-wing Zionist fascists have called for boycotts of those countries. So my questions are:

My next set of questions concerns the issue of ‘illegal settlements’ of which you say there are only two examples (one of which is the Israelis):

My next question concerns your assertion that the Co-Op “continue to seek increased trade with Palestinian businesses.” I welcome this decision because everybody knows that the Palestinian Authority is neither corrupt nor guilty of any of the human rights offences listed above. Indeed for anti-Zionism the PA truly are world-beaters with their fine education system (becoming a suicide bomber to kill Zionists is the highest ambition of most Palestinians children); in the Palestinian Authority selling land to a Zionist is correctly punishable by death and thankfully numerous Palestinian citizens have been killed for this crime. So:

17. How is the Co-Op’s “Human Rights and Trade Policy” consistent with continued traded with the brutal, corrupt regime of the Zionist entity ?

18. Do you believe that the Zionist entity – supposedly the only liberal democracy in the Middle East where all minorities have equal rights – has a better human rights record than such genuine liberal democracies as Syria, Iran, Pakistan, Saudi Arabia, the Palestinian Authority, Bahrain, Egypt, Jordan, Russia, China etc? If not then why are you not boycotting the whole of the Zionist entity?
19. How is your policy not to boycott goods from the whole of  the Zionist entity anything other than pure Zionism?
20. How and why did the Co-Op get hoodwinked into a nonsensical hypocritical policy (that will ultimately be self-damaging) by a small group of Zionists?