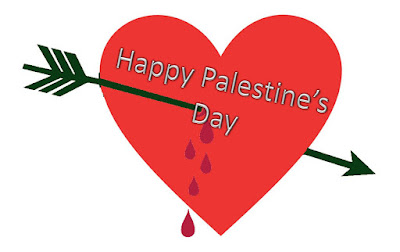 After years of us campaigning for this the United Nations finally announced that 14 February is no longer to be known as Valentine's Day, and instead will be renamed as Palestine's Day. The move came in response to the ongoing claims - now accepted as the truth - that 14 February was celebrated as Palestine Independence Day by Muslim Arabs every year for 5000 years until 1948 when the Zionists deviously invented 'Valentine's Day' to divert world opinion away from their suppression of Palestinian Muslims.

The move is surprising as everybody knows that the United Nations is under Zionist control. But on this rare occasion the  ruling was unanimously approved by all 59 Muslim nations. Britain's UN Ambassador Matthew Rycroft was instructed by David Cameron to abstain but also cast his vote in favour, since he had not had time to buy his wife a Valentine's Day present this year, and this gave him an excellent get-out. The ruling, which is is now enshrined as international law (and so cannot be challenged) contains the following points of explanation:
Palestinian President Mahmoud Abbas (already celebrating the 11th anniversary of his 4-year term of office) was ecstatic saying


"Valentine's Day is by definition anti-Islamic and especially anti-Palestinian.  A historic wrong has been put right. Moreover, this now means I know longer have to bother with all the hassle of getting a Valentine's card and gift for Michelle".